HONOLULU, May 15, 2019 /PRNewswire/ — The Howard Hughes Corporation® (NYSE: HHC) announced today that it has begun welcoming residents to Ke Kilohana®, the first reserved housing tower and fourth mixed-use residential building to be delivered at Ward Village®, the award-winning 60-acre master planned community transforming Honolulu’s urban core. Yesterday’s milestone was celebrated with a traditional Hawaiian blessing ceremony attended by Mayor Kirk Caldwell and hundreds of Ke Kilohana homeowners. Ward Village continues to see strong market demand for its residences. Since beginning sales in early 2014, the company has contracted to sell 2,339 homes across the six towers delivered or under construction, generating $2.68 billion in revenue as of April 30, 2019. This includes 354 homes pre-sold at the newest building Kō’ula.

«Ward Village continues to grow into one of the most distinguished urban master plans in the country, with each new tower bringing additional residents and vibrancy to the community,» said David R. Weinreb, Chief Executive Officer, The Howard Hughes Corporation. «The opening of Ke Kilohana adds yet another layer of residential offerings and we are pleased to see the impact Ward Village continues to have on the lives of our thousands of homeowners and the broader Honolulu community as a dynamic destination.»

In January 2019, Ward Village launched sales for Kō’ula, the latest tower that is designed by famed architect Jeanne Gang, founder of Studio Gang. The exceptional pace of pre-sales at Kō’ula has resulted in the project being approximately 55.6% pre-sold in less than three months, continuing the high demand for residential offerings seen across the community’s six towers. In addition to Ke Kilohana, which is sold out, Ward Village is quickly approaching sellout of Waiea®, Anaha®, Ae`o®, and ‘A’ali’i. Waiea is 95% sold, Anaha is 99% sold, Ae’o is 99% sold, and A`ali`i, which represents the first-ever luxury turnkey building in Hawai’i, is currently under construction and more than 81% sold.

Of Ke Kilohana’s 424 total homes, 375 were priced to meet the demands of local households with incomes between 100 and 140 percent of Honolulu’s area median income (AMI), adding a robust supply of affordable housing to Honolulu’s urban core. Ke Kilohana launched sales in April 2016 and is expected to see the majority of homes close by June 2019.

«Ke Kilohana delivers on our vision of building a diverse spectrum of homes at varying price ranges in a thoughtfully curated and integrated community,» said Simon Treacy, President Hawaiʻi, of The Howard Hughes Corporation. «Our recent refresh of the Ward Village master plan highlights a newly concentrated focus on greater connectivity, activated public space, and well-being—as embodied by the recently opened Victoria Ward Park, which serves as a central plaza and key public gathering space for the community.»

Later this year, Ke Kilohana will debut a 23,000-square-foot Longs Drugs store, providing the convenience of a full-service pharmacy to the growing neighborhood that already features a flagship Whole Foods Market, along with diverse shopping, dining and entertainment avenues. This summer, Hawaii Pacific Health is set to add a 4,800-square-foot medical clinic to the expanding community. Ke Kilohana derives its name from one of the highest mountain peaks along the Ko’olau range of O’ahu. The building’s hallmark exterior yellow accents allude to the Native Hawaiian legend of Keaomelemele, a goddess who inhabited sun-streaked clouds.

With walkable pathways, dedicated bike lanes and tree-lined sidewalks built into the design, Ward Village is at the forefront of sustainable community development as the largest LEED‐ND Platinum certified master plan development in the country and the only one in Hawai’i.

A part of HHCares – The Howard Hughes Corporation’s company-wide, integrated social responsibility program – the Ward Village Foundation reflects the company’s culture of giving back and sustaining communities through active engagement. Since its inception, it has donated over $2 million to local nonprofit groups, dedicated to supporting forward-thinking initiatives that honor Hawai’i’s rich history by fostering the community. For more information, visit www.wardvillage.com.

About Ward Village®
Being developed by The Howard Hughes Corporation®, Ward Village is a 60-acre coastal master planned community in the heart of Honolulu, located between downtown and Waikīkī in the Kaka’ako district. Honoring the distinct history of its land, Ward Village is at the forefront of sustainable community development, integrating significant architecture, local culture, and public space. New tree-lined sidewalks and bike lanes provide access to an over 100-acre public beach park, as well as the recently revitalized Kewalo Harbor. At full build-out, the development will include approximately one million square feet of unique retail experiences and thousands of homes in the community named «Master Planned Community of the Year» by the National Association of Home Builders and «Best Planned Community in the United States» by Architectural Digest.

Resulting from strong demand for new housing in Honolulu and the desire for an urban walkable lifestyle, Ward Village is quickly approaching the sellout of its first four mixed-use residential towers delivered —Waiea®, Anaha®, Ae’o®, and Ke Kilohana—which are transforming the popular shopping and dining district into a vibrant neighborhood that offers ocean views and a thoughtfully curated mix of retail and lifestyle experiences set among walkable, open spaces. In 2018, Ward Village introduced ‘A’ali’i, the first turnkey project in Hawai’i, followed by Kō’ula, the community’s latest tower which is scheduled to break ground in summer 2019. ‘A’ali’i and Kō’ula will continue to expand the selection of new homes as well as activate the communities newly opened outdoor gathering place, Victoria Ward Park. Named after the land’s most famous steward, Victoria Ward, the park serves as the community hub for outdoor recreation and ongoing events. In May 2019, Ward Village welcomed its latest residents to Ke Kilohana, the neighborhood’s first affordable housing tower.

Art and culture play an integral role at Ward Village, with public art highlighted throughout the neighborhood, including large-scale wall murals, sculptures and locally inspired exhibits. As a destination for art and culture, Ward Village continues to serve as the founding and co-title sponsor of the Honolulu Biennial.

As the largest LEED‐ND Platinum certified master plan development in the country and the only one in Hawai’i, Ward Village is at the forefront of sustainable community development and will feature public amenities at a scale not offered by any other urban development in the state. For more information, visit http://www.wardvillage.com. 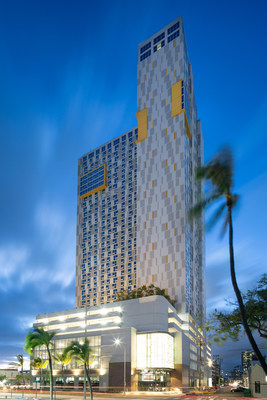