The Maui Celebrity Series will return in 2020

MAUI, Hawaii, Nov. 26, 2019 /PRNewswire/ — Singer Brian Evans says he will once again bring The Maui Celebrity Series to the island of Maui.

«We are in discussions with serious sponsors and venues now,» says Evans. «Having produced over forty concerts taught us a lot, and I’m looking forward to bringing top notch entertainment once again to the island,» he says.

Evans has his hands in a lot of pots. He is currently filming the music video, «A Beautiful Game,» the first ever jazz song recorded for the sport which will come out worldwide in 2020. He’s the writer of the novel «Horrorscope,» which just got picked up by Westwind Comics, distributed through Diamond Comics.

Evans produced shows at Lahaina’s Maui Theatre, The Lahaina Civic Center, and The Maui Arts & Cultural Centre, and Sheraton Maui Resort over the years. He’s been in discussions with numerous celebrities, many whom he has performed as their opening act. Evans uses local Maui talent to open for the national acts in order to provide them with an opportunity for doing so.

«We’ve never had a problem securing a venue, or talent, so it’s really just about lining up what we want to do. Our tickets are sold on Expedia when they are on sale, and everyone from «Entertainment Tonight» to «MTV» has flown out to cover the concerts produced by The Maui Celebrity Series.

«Most of our sponsors have been from the mainland as they seek to drive people to Hawaii, including hotel chains, airlines, and ticket agencies,» says Evans.

Evans filmed «At Fenway» with William Shatner, a music video that has garnered more than 11 million views on YouTube, «Creature at The Bates Motel,» and is the only singer ever to film a music video on the set, home to the Alfred Hitchcock thriller, «Psycho,» and is currently filming «A Beautiful Game,» based on his song, the first jazz song ever to be recorded about the game of soccer. The music video co-stars Lou Diamond Phillips, Carrot Top, RJ Mitte of «Breaking Bad» fame, and ICE-T.

This time around, Evans is in talks about a reality show being produced on what it takes to create the series.

«We talk to everybody, no harm in that,» says Evans.

Evans has received three Governor Commendations from three different governors for his work in producing the series, which ultimately provided tourism to Maui. 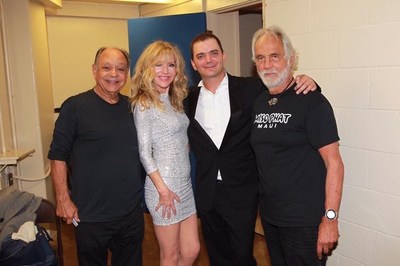